Apple has put two new iPad models in the shop window. On the one hand the “normal” eighth generation iPad (here our test report) and now again the fourth generation iPad Air. And I looked at that once. And I have to write ahead of time: The iPad Air is almost an iPad Pro for normal users, just like the iPhone 12 is probably “the” iPhone for most, which is completely sufficient. Just because “Pro” is added to a model does not mean that the user is non-Pro if he is not using a Pro model. If I drive mostly in urban areas, then I won’t buy a car with 200 hp.

I look over my shoulder while working and of course other people who are on the move with the iPad. The iPad is widespread in my circle of friends – there are hardly any models from other manufacturers, which is certainly not only due to Apple’s ecosystem, but also to the market for accessories. You can easily hand these things into your hand every 4 or 5 years and you can work carefree.

But I don’t want to start a fundamental discussion, I want to tell you about the iPad Air, which I tested in its WLAN version. Sure, you can also have it as an LTE model, but it costs more and many people only use an iPad at home anyway – and when you are out and about, you turn on the smartphone’s hotspot.

Perhaps exciting for households that have an iPad Pro (2018/2020) and an iPad Air: The Magic Keyboard fits both models. If you don’t always need the keyboard, you can share it with your partner – you can save a few euros there too. And yes, it is completely different to write on a Magic Keyboard than on the other keyboards that Apple usually has on the case (regardless of the fact that there are accessory manufacturers like Logitech who also offer good keyboards).

If you hold the models next to each other – i.e. iPad Pro (11 ″) and iPad Air (10.9 ″), you will notice a very great similarity. They are almost twins. Basically identical design with flat sides, no home button, USB-C – but without Face ID, instead the fingerprint sensor for unlocking is hidden in the home button. This is unfamiliar at first if you already know Face ID on the iPad Pro. As an iPad Pro user, you just swipe the display and you’re in the system. Here you just have to put your finger on. By the way, Apple asks for the unlock pattern when setting up for portrait and landscape format – I also recommend registering one or two more fingers.

Even if this report revolves around the new iPad Air, I like to compare it with the Pro – so you might see that the Air might be completely sufficient. With the display, for example, the difference in size is hardly noticeable. 0.1 inches is not the world. According to Apple, the iPad Pro has a higher performance in terms of brightness than the Air. However, I didn’t really notice these 100 nits.

In a direct comparison, however, you can see the difference between the Pro-Motion-Display of the iPad Pro and the iPad Air of the fourth generation. The iPad Pro dynamically achieves up to 120 Hz, which the iPad Air cannot. Yes, you can tell in a direct comparison – of course. Anyone who plowed 120 Hz for a long time will surely notice refresh rates of 90 Hz or even 60 Hz – at least until you get used to them. The iPad Air is not bad in that respect, by no means – but you can tell when you compare the two with each other. With the iPad Pro, everything is a corner round when it comes to movement. But hey – who will switch from Pro to Air?

There are also differences for people who work with the Apple Pencil: The Pro is supposed to record inputs via the display with lower latency. When I write with the Pencil on the Air, it honestly makes zero difference to me. I personally don’t notice it in normal use, so: it doesn’t matter.

In daily use during normal work: no lags. Neither writing, surfing, nor gaming, editing photos, films and series, music – the iPad Air did everything really well. Apple has done well again with the A14 Bionic. Although one can say that the devices from 1 or 2 years ago are also sufficient for people who do more than just visit the web. What’s awesome, that’s the pure performance in Geekbench:

When it comes to sound, I’m a little spoiled by the iPad Pro, but the iPad Air can also have a say. The stereo speakers sound good, both in portrait and landscape format. It’s always very important to me because I run on the treadmill every now and then and don’t use earphones – an iPad speaker has to do a little more. Works great with the iPad Air – you can also sit outside with it and use it as a “small stereo system” when nothing else is at hand. When it comes to battery life, I always get there as roughly indicated by Apple. Of course, it is also a matter of what you do.

For example, when I stream films on the treadmill in the dark garage, I use less energy than during the day because the brightness of the display is higher and, and, and. I don’t have to tell you. If the iPad Air is empty, it goes to the power supply. In contrast to the iPhone 12, there is a power supply included. 20 watt, USB-C to USB-C as a cable is included. So you can’t charge your iPhone as well, unless you get a USB-C to Lightning cable. 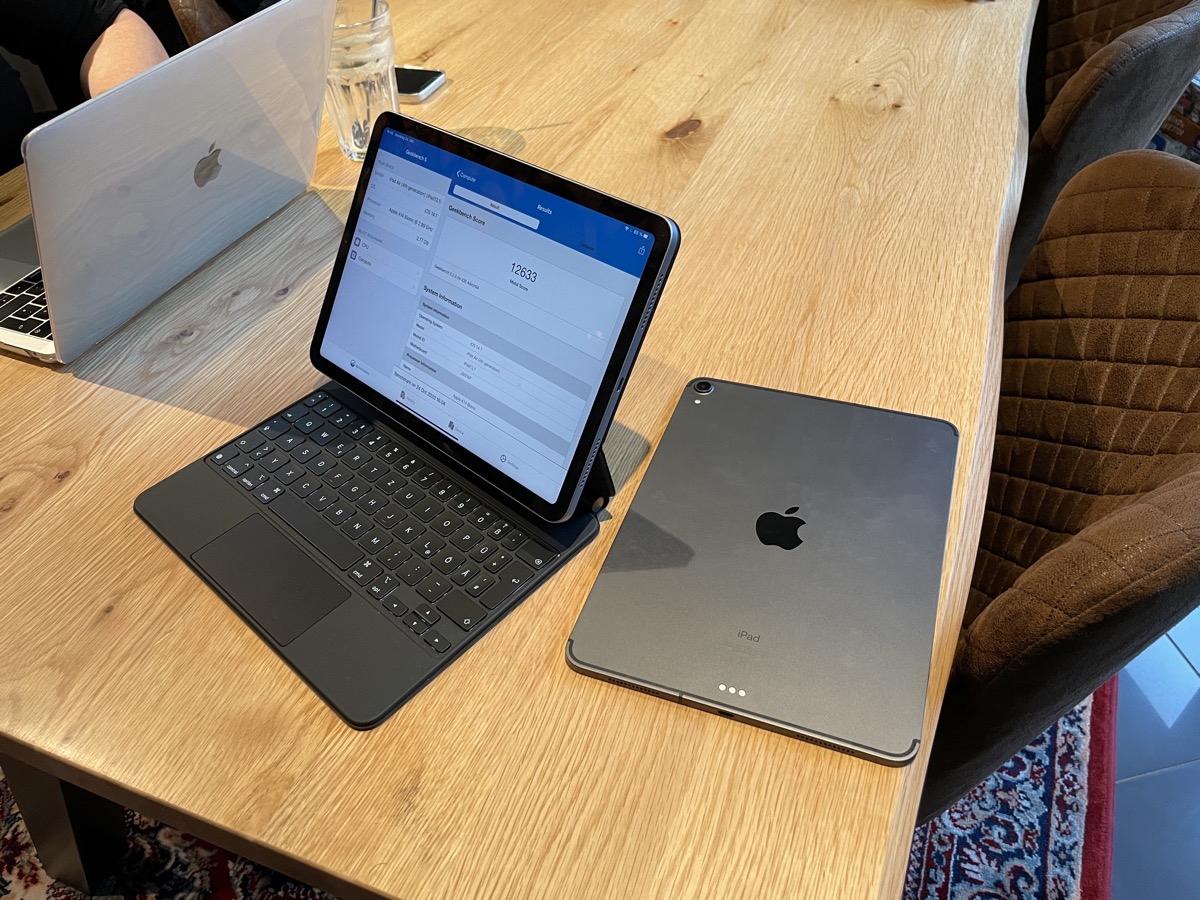 Cameras? Yes, are also included in the new Air. I’m not an iPad clipper, but I’m happy to know I could! There are 12 megapixels with f / 1.8 aperture at the back, 7 megapixels at the front. Videos can even be recorded in 4K. If you look at the individual cameras of the iPhones from previous years, then it’s nice that you have something like that in the iPad Air “if necessary”.

Great display and speakers. I leave out iPadOS – good system with a huge selection of apps and games. The performance is fantastic. With Wi-Fi 6, the iPad Air is also well positioned for the future when it comes to WLAN. You can use the accessories of the iPad Pro. Many colors are available. Is not mentioned in the test, but a great thing for people who value something like that.

Of course I can’t see clairvoyance, but 64 GB would be too little memory for me. You are there for 632 euros. There is no intermediate level, 256 GB of storage then cost around 799 euros. Mind you: with the WLAN variant. I don’t want to find out why LTE still costs 140 euros more.

Now we come to the plot twist – the 11-inch iPad Pro has 128 GB of storage in its basic configuration and the “older” but still very powerful A12z processor. Apple costs 856 euros. So 60 euros more than the iPad Air with 256 GB of storage. In any sales or used, the iPad Pro is sure to be even cheaper. Although you have less memory and the older processor – but also the Pro-Motion display, the really comfortable and good Face ID, more camera and the really great 4-speaker audio system. I don’t chat to anyone and don’t give any recommendations – but I want to have it mentioned.

The bottom line is that Apple was able to deliver again with the iPad Air 2020. Great device, now also “in colorful” – and practically an iPad Pro “light”. A worthwhile upgrade for all those who are still traveling with very old boxes and want a powerful device again for the next few years.

Amazon links are included in this article. Clicking on it will take you directly to the provider. Should you decide to buy there, we will receive a small commission. Nothing changes in the price for you.

This website uses cookies to improve your experience while you navigate through the website. Out of these cookies, the cookies that are categorized as necessary are stored on your browser as they are essential for the working of basic functionalities of the website. We also use third-party cookies that help us analyze and understand how you use this website. These cookies will be stored in your browser only with your consent. You also have the option to opt-out of these cookies. But opting out of some of these cookies may have an effect on your browsing experience.
Necessary Always Enabled
Necessary cookies are absolutely essential for the website to function properly. This category only includes cookies that ensures basic functionalities and security features of the website. These cookies do not store any personal information.
Non-necessary
Any cookies that may not be particularly necessary for the website to function and is used specifically to collect user personal data via analytics, ads, other embedded contents are termed as non-necessary cookies. It is mandatory to procure user consent prior to running these cookies on your website.
SAVE & ACCEPT